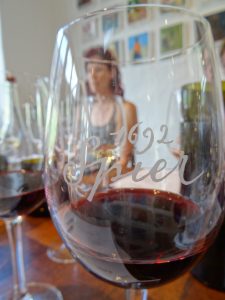 I really genuinely hate air travel. I will do pretty much anything I can to avoid it. I’ve taken a 16 hour train journey from Suffolk to Barcelona to avoid a 3 hour flight. It’s not that I’m afraid of flying, there’s just something about the whole experience that I find fundamentally unpleasant.

South Africa however is a bit of a trek. Personally I’m completely up for a McGregor/Boorman type epic, but there are certain logistical problems. Mainly not having anything like the spare cash that Ewan McGregor has. Or time. He does seem to have a lot of spare time.

There’s never anything on the entertainment system that I want to watch. I have no idea why. It could have my favourite show on there and I still wouldn’t want to watch it. I’ve gone through it all, pawed the duty free catalogue, scanned the in flight magazine and read the safety instructions twice. It’s half past midnight and I am still quite unreasonably awake. It’s at times like this when I conclude that it’s a good idea to listen to Pink Floyd’s Atom Heart Mother.

I’m almost coming to terms with “Alan’s Psychedelic Breakfast” when I suddenly become aware of something plasticky in front of me. I’m just about to “put it over my mouth and breathe normally” when my nose informs me that it’s curry. I conclude that I could in fact eat, not because I’m hungry but because I’m bored and I’m hoping that redirecting some of the blood supply from brain to stomach might help me at least doze.

To this end I order wine too, “Cabernet Sauvingon?”, I enquire. “No, but we’ve got Sauvingon Blanc”, comes the reply. “No thanks,” I interject, “Cabernet Sauvignon is a red” but it’s too late and an open mini bottle of white wine lands on my tray table. I note that is a Marlborough and decide that it’s better the devil you know.

Nevertheless my plan works and half an hour later I’m in the land of nod.

I awake to the rather uncomfortable realisation that I ordered Asian Vegetarian food on this flight. I usually do because it seems more difficult for airlines to murder curry then it does any other type of food. Unfortunately breakfasts can get interesting as I’m about to find out when I’m served bland, generic cheese, coleslaw and sort of bread that tastes like dehydrated semolina pudding.

On the bright side I conclude that breakfast service must mean that I got a good few hours sleep and that there can’t be that much time left on the clock. I don’t dare look however.

I fire up my music player and decide to give the Amaranthe album I curiously downloaded on Spotify a listen. The first track is good, but I very quickly conclude that although Euphoric Dance / Death Metal crossover might sound like an interesting and challenging concept, right here, right now it’s just very, very annoying.

Thankfully the entertainment system has some Chopin and my eyelids are starting to feel heavy again.

There’s an eerie silence when I wake and another strong smell of curry. Chopin has finished and my noise cancelling headphones are busy cancelling out the drone of 4 enormous GP7000 series jet engines.

I lift the lid on the tray in front of me: the airline chefs have surpassed themselves this time and reached a whole new level of achievement. Somehow they have managed to screw up a paneer curry.

Fortunately there are enough other dishes to make a meal. There’s even some spare cheese, just in case cheese in lightly spiced cream sauce wasn’t enough dairy for one meal.

By the time I’ve obtained a cup of tea I’m feeling brave. I’ve had two good sleeps and three bad meals. We must be nearly there, right?

3 hours to go. There’s nothing out the window but cloud. The aircraft cameras are showing nothing but cloud.

Now all we need is some… whoa! Where’s the floor gone? Is that kind of jolt within the tolerances this plane was designed for? “A bit bumpy”, why yes Captain I think we’ve all noticed that. There was a small hint in that if I hadn’t been wearing my seatbelt I’d be sitting in the overhead locker right now.
I then spend the next few moments marvelling at how, firstly, relatively minor atmospheric conditions can hurl a 500 tonne plane about like a piece of confetti and secondly what a superb piece of engineering it is that a 500 tonne plane can be hurled around like a piece of confetti without the wings falling off.
Now however the baby is screaming and the bloke next to me is pale as a ghost and clinging on to the arm rest for grim death.

I try to think of some words that might be of comfort to him, but everything I can think of either makes me sound like a smug git or contains the word “plummet”. I do however make a note to stop jokingly referring to our destination – a well known London airport – as “Splatwick”.

Still more than 2 hours to go but on the positive side, I’m starting to wonder if there’s some mileage in trying to write a blog article about why I hate flying so much…