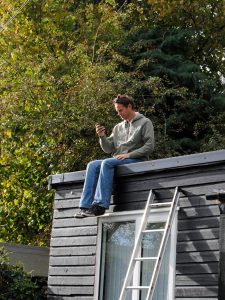 Someone recently accused me of replying too slowly on WhatsApp. “First Class post” I replied, “is the most rapid form of communication of which I approve.” I wasn’t joking.

The fact that you’re not going to get a reply for at least 24 hours, if not the best part of a week, tends to rather focus the mind. You have to concentrate on exactly what you want to say, no more, no less and ensure that your communication is complete. There’s no “soz, not what I meant lol” if you botch what you were trying to say.

Writing someone a letter makes you value the communication.

I’ve never been comfortable with the telephone, I consider it a step too far. A letter arrives on your doormat. You might pick it up and open it immediately, or put it aside for later. It’s your choice. You can then think about your reply whilst you’re cooking or re-glazing the east wing.

The telephone however screams “STOP!” when it rings, “whatever you are doing cease it now! Someone wants to talk to you!” It’s just plain rude. On top of that it might not even be a conversation that you wanted to have at that time.

No, the telephone is an abomination and the mobile phone doubly so. There are numerous reasons why one might not answer a house telephone. There is no escape from the mobile, it’s there, in your pocket, constantly buzzing, continually demanding attention.

We now have so many ways of near-instant communication that we have lost all respect for the privilege that technology has brought us. Instead we spend every waking minute in cataclysm of indistinct missives trying to make sense of a world projected into our hands by people who are at best as misinformed as we are.

Don’t get me wrong, I’ve spent the past 20 years delivering ever-improving communication technology into the hands of our emergency services. I’m very much in favour of the technology.

I am more that happy that I have in my pocket a device that lets me communicate in a variety of ways with almost all of my family and friends, with businesses, government and even write articles like this that will be read by complete strangers.