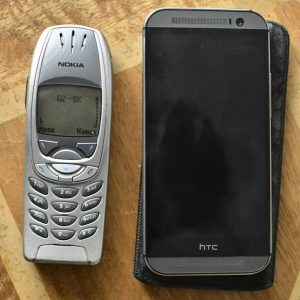 In the words of a certain radio station, “Social media can be a force for good, but it can also be a giant pain in the arse.”

When I wrote that First Class Post was the most rapid form of communication of which I approved I was only half joking. I recently spent two weeks in India. Rather than deal with the expense of roaming or hassle of a local SIM I just turned mobile data off. It was a surprisingly liberating experience.

It’s not like I dropped off The Internet completely: there’s free WiFi in most hotels and a few restaurants. What I found though was that having Internet access time-boxed had a far greater effect on the way I lived my life than I could ever have imagined.

It’s true – the increased ability to communicate can benefit us very greatly. For instance, we’re now talking about the ability for members of the public to stream video directly into an emergency service control room. That information could be hugely useful to the call-taker, in informing the member of the public, in informing the crews being sent to the scene and also providing an evidence trail for any followup action.

On the flip side however, as I’m sure you can imagine, the ability to stream video from a remote location to another, particularly via an end-to-end encrypted channel, facilitates some of the most appalling people in existence.

To a lesser extent the same is true of social media. It enables us to keep in contact with people that we would otherwise naturally lose touch with, but it also throws up conflicts that we would never otherwise have. On top of this the social media companies themselves aren’t making money unless you’re using them. They make every effort to ensure that their platform invades your life as much as possible.

Over the past year or so I’ve become utterly frustrated with this: I’ve disabled all notifications from every social media app on my phone. What India taught me however is that this isn’t enough. If I really want to take back control from social media, I have to remove myself from the social media environment and only step back into it on my terms.

Social Media is not a new thing, it existed back in the dial-up days. The difference was that to be online you had to make a phone call, and the costs could mount up if you weren’t careful. You had to set limits, for purely financial reasons (especially if you were on a trainee’s wage).

Just before we left for India, my partner and I were in a restaurant and the couple next to us spent the entire meal on their phones. They barely talked to each other. The first rule therefore is:

No phones at the dinner table, wherever that dinner table is: in the house; in a restaurant; a picnic table in a field; etc.

Unless there is a clear reason to take the smart phone out, take the dumb phone [see above photo].

The penultimate rule I call the “Soap Opera Rule”. In many ways Social Media is like a Soap Opera, the two differences are that it deals with real people and that it’s constant, it doesn’t come in half hour chunks 3 times a week. The former is somewhat the point of Social Media. The latter is something that you have to manage and it helps if you think of it more like a Soap Opera:

Of course there are exceptions to every rule. When we’re talking about usage limits we have to consider what the purpose of usage is. If you’re organising a family meal via WhatsApp that’s not the same as reading your Twitter timeline.

The key here is be sensible and maintain perspective.

The last rule is the simplest of them all:

Social media is no way to conduct a friendship. Sure, it’s a great way to allow you to find people with common interests and to keep touch with people who you would otherwise lose touch with. Those people aren’t your friends (although they may have been or may become so). Ultimately, friends are not people you broadcast status updates to. Friends are the people you have a conversation with when you have news.

So call them, invite them round for tea, go to lunch with them, go watch a film with them but interact with them directly and personally, not via timelines and group chats.

From now on I’m going to be following these rules. In reality you probably won’t notice any difference, but I think it’s going to make a big difference to me and I hope these words make a difference to other people.

Remember that it’s in the interests of the Social Media companies to create a society where it’s socially unacceptable not to be glued to your phone. Don’t sign your life over to them: take back control and always, always be true to yourself.